Today was my last Thursday knit group until I return from the trailer in late summer. Next Thursday, we will be frolicking at Ontario Place with four kids and by the following week we will be at the trailer. So I won't see the Meaford knitters until late August.

The rest of the group obviously weren't too concerned by my ominous threat tone last week as most were again today, involved in non-knitting, summer activities. Sandy B was back ,though, with the delightful little bolero 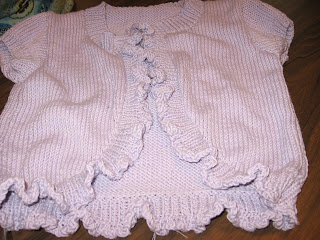 (See pattern photo here - scroll down)
she knit for her grand daughter. Just as Sharon's knitting was the primary photo focus last week, today, it's Sandy's. 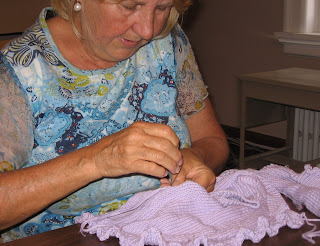 Here she is, in total concentration, finishing up the seaming. (If you get a kick out of seeing knitters sputter in frustration, ask Sandy B how she likes seaming.)

And here she is, 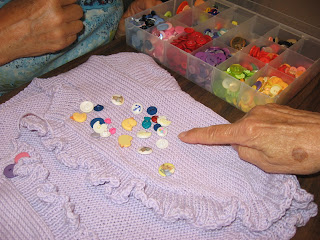 with the help of the other Sandy, deciding on a button.

Sandy B came across a great sale and purchased LOTS and LOTS of buttons. Her button box puts mine to shame.

Have a great summer, Meaford knitters. See you in late August.
Posted by Brendaknits at 7:10 PM